Nora Buchholz is the newly appointed Safety Manager at the Western Energy Company Rosebud Mine near Colstrip, Montana. The Rosebud Mine is a three-pit, 25,000 acre surface coal mine that produces 10 million tons annually. The mine has been in operation since 1968 and supplies nearly all its production to four steam plants in nearby Colstrip. Nora spent five years as an engineer in the Environmental Department at the Rosebud Mine and recently earned her Master's degree in Industrial Hygiene. She started her position as Safety Manager in March, 2007 when the Values-Based Safety® Process was in the initial stages of development.

As Safety Manager, Nora works in accordance with federal and state agencies, like the Mine Safety Health Administration, to ensure all safety guidelines are met. Nora handles all the annual safety inspections and also heads safety training at the mine. Kent Salitros, President and General Manager of Western Electric Company, explained that Nora works with everyone to immediately and officially respond to safety issues, "Of course, safety is everybody's job, but Nora is the one that sees that all the pieces fit together," he said. 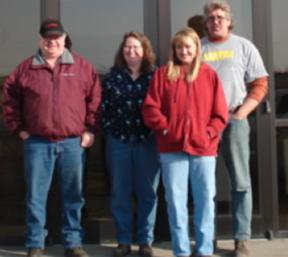 Implementing the VBSP at a large surface coal mine has proven to be both incredibly challenging and rewarding for Nora. The mine operates 24-hours a day, with four rotating shifts of employees. Nora manages four Steering Committees, one representing each shift, made up of Union workers and one salaried employee. She explained that her job is very demanding, but her hard work is well worth the positive outcomes she currently sees occurring at the mine, and the continued positive developments she expects in the future.

Under Nora's direction, about 90% of the mine's 400 employees are now trained safety observers. Trained observers are asked to complete two safety observations per month. Steve Coats, a Welder/Mechanic who has worked at the mine for 10 years and is a Union Steering Committee representative, explained that maintaining a safety process at the expansive coal mine can be challenging but employee involvement is crucial, "Observations are tough to do, but I think its worth it. Safety is a real issue in our work society, and to me, I'd rather be involved with it... if you're not part of the solution, you're part of the problem."

Nora reported that even in the very beginning stages of the VBSP, incidence rates at the mine have already started to drop. She also notices an increase in safety-based communication at the mine, and believes that just having employees talk more about safety is impacting the work environment in a positive way. To increase communication about safety, Nora publishes a safety newsletter in which she openly communicates safety issues to everyone. "She does not make it a secret," Steve Coats explained, "now it's starting to be okay to be safe, and not take shorts cuts." Kent Salitros explained that Nora has the ability to really communicate with various members of the workforce, and that she creates a less-adversarial relationship with regards to safety. Nora hopes that implementing the VBSP will continue to strengthen the trust between employees and management at the mine, and that the process will "get them talking" and continue to open the lines of communication about safety.

In addition to being the safety manager, Nora is also a member of one of the Steering Committees. She finds it very gratifying to get out of the office and meet and interact with Union employees that she never had the chance to work with prior to the start of the VBSP. According to Steve Coat's, Nora is definitely an effective communicator herself and facilitates safety-based communication among employees at the mine. He commented, "It's nice to have Nora, she is easy to talk to and will listen, and lets everyone know what's going on." In addition, Kent Salitros explained that Nora does a great job of listening, responding, and taking action to address the safety concerns of the employees.

In her short time as Safety Manager Nora has experienced many successes, overcome numerous hurdles, and has lead the way for improved safety conditions and behavior at the Rosebud Mine. Nora's efforts are recognized and appreciated by her colleagues. Steve Coats explained that Nora is definitely a Safety Champion for the mine because she "Strives to move forward and is good to work with." Kent Salitros commented, "Nora has done a great job handling it all."

Through all the challenges, Nora's dedication to improving safety of the mine's employees remains steadfast, "It can be overwhelming," she commented, "But, it will be worth it."

Hats off to you Nora! Your leadership and dedication make you a true Safety Champion!