Despite the unique challenges of the construction industry, Linbeck Construction Corporation in Houston, Texas has achieved a 50% reduction in their incident rate with a Behavioral Safety Process.

Linbeck Construction, a Houston based general contractor, has historically had lower injury rates than their industry. In 2002, Linbeck's medical attention case rate was 4.8 and their lost time case rate was only 1.3.

As a result, Linbeck's worker's compensation insurance rates were lower than the industry average. As result of improvements in the industry's safety record, Linbeck anticipated that the advantage they enjoyed in comparative worker's compensation premiums would erode. Company executives were committed to maintaining their leadership position and looked to meaningful employee involvement to further decrease their incident risk.

Construction projects, no matter how large, are, by their nature, time limited. The nature of the work and the composition of the workforce also change continuously over the course of the project. From clearing a green-field site to final installation of security systems and internal fittings, the people involved can vary from one superintendent coordinating the work of dozens of subcontractors and their scores of employees to a series of general contractor employees such as ironworkers, laborers, and carpenters. Other barriers cited by many in the industry were the education and literacy levels of employees as well as their level of commitment to the company. Construction workers typically move from contractor to contractor as the level of work varies. Many people were concerned that the short-term nature of employment would mean that employees would not be motivated to participate in a Behavioral Safety process.

These characteristics of the industry had prevented many construction companies from trying an employee-driven Behavioral Safety approach in the past. Linbeck was willing to assemble an employee Design Team to see whether they could design a workable implementation plan for their company.

Twenty foremen, superintendents, and project managers - the first three levels of permanent employees - were invited to participate in designing the Behavioral Safety Process following an orientation to the process. After an educational workshop, they conducted their design work in a series of working meetings. Three regional sub-teams customized each of the key elements of the Behavioral Safety Process and drafted an implementation strategy for their differing situations. Each regional team designed a process for a different kind of construction project as well as for their regional operations.

These specific projects included a ground up construction project scheduled to last two years (the new branch of Federal Reserve Bank of Dallas in Houston); a renovation project being conducted primarily by subcontractors (Yale University Pierson dormitory in Connecticut), and a multi-year, multi-project renovation and construction where Linbeck is a semi-permanent presence on-site (Cook Children's Hospital in Fort Worth, Texas). 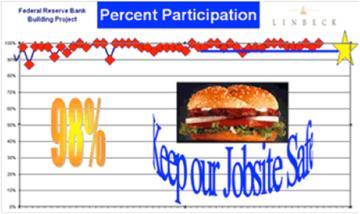 The implementation model devised by the Linbeck team was:

The majority of most crews and a large minority of other employees were most comfortable reading and speaking Spanish. We trained two Spanish-speaking trainers to deliver the Observer workshop, translated the checklists into Spanish, and provided feedback on the process in Spanish at toolbox safety meetings.

Linbeck's work schedule is affected by the weather and subcontractors work in unpredictable ways. We broke the original training workshops into shorter modules that could be delivered one at a time without adversely affecting the project schedules.

Linbeck employees move from project to project as the work dictates. Instead of waiting to roll out the process to new projects, employees themselves decided to start Behavioral Safety on each new project to which they were reassigned. This was an example of the empowerment of local Steering Committees. Steering Committees were very creative in devising ways to ensure that all their participants continued to reap the benefit of the process no matter where they worked.

Although the rate of hiring new employees on some pilot projects might have been considered high enough to justify scheduling an Observer workshop, the local Steering Committees were committed to involving newly hired employees as soon as possible. They therefore arranged for each employee to be individually trained on the job by a Design Team/Steering Committee member. 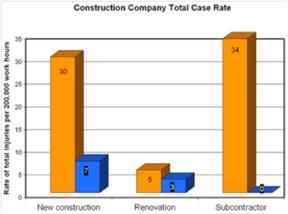 Employee participation as peer observers/feedback providers was amazingly high – higher than that achieved by many companies with a more stable and more educated workforce. Participation – which the Steering Committees define as conducting two observations a week – averages 99% at the first location, 95% at the second, and 65% at the third. Steering Committees in all three locations are active and strong. They meet regularly to analyze the data for opportunities to improve the work environment to encourage safe work practices. They also manage individual recognition, site goal setting, and site celebration plans to support employee participation.

Employee response has been overwhelmingly positive – a recent survey found that employees report that they believe they have improved their safety at home as well as on the job. The first pilot location reduced their total incident rate from 30 to 6.5 and sustained that rate in the fifteen months since implementation. The second reduced their already low rate of 5.0 to 3.0 and continue to sustain that in the sixteen months since kick off. These successful projects illustrate one of the key features of the Quality Safety Edge Behavioral Safety Process – employee and manager involvement from the beginning of the design process through implementation. In fact, employees on one pilot site revised the design to include observing subcontractor employees because they believed this was where the greatest exposure on their project lay. The response from the subcontractor employees has been positive – they don't seem to mind being observed and receiving constructive feedback on their safety practices.