Donna Armstrong was recently appointed the Values-Based Safety® Coordinator for Foster Wheeler in Houston, Texas. Foster Wheeler, an engineering and construction company, began designing their BSMART (Behavioral Safety Management and Recognition Techniques) process in 2006 during a period of rapid expansion for the company. Donna has been invaluable to the company's challenging implementation process from the start.

After working in radio and television, Donna began as an Administrative Assistant at Foster Wheeler. In 2006, she started her involvement in the VBSP as a member of the Design Team, was later voted as chair of the Steering Committee, and soon after moved into a newly created role as the VBS Coordinator. Among her multitude of duties, Donna is an internal Trainer, coordinates all VBSP-related training, creates media for the promotion of BSMART, and tracks and analyzes BSMART safety observation data. 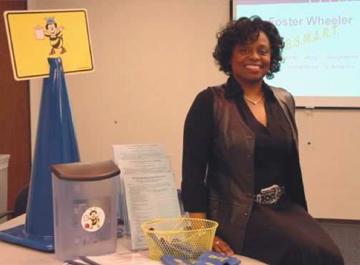 For Donna, volunteering is an important part of life at home and at work, and she explained simply having a "natural instinct to volunteer." When the company asked for employee involvement in the safety process, she immediately jumped at the opportunity. A VBSP training session, headed by Dr. Grainne Matthews, really "struck a chord" with her, and as she learned more she became invested in the VBSP and dedicated herself to its success at Foster Wheeler.

Chip Rogers, Foster Wheeler's Corporate Safety Manger, remembered how enthusiastic Donna was at the start of her involvement in the process and that she clearly viewed the implementation of the VBSP as a positive change for the corporate culture. Mr. Rogers explained that Donna is a"focal point" for BSMART and the driving force behind the process.

Donna is incredibly driven and often works long hours. She explained that heading the BSMART process is not always easy, "Its like anything else, there are hills and valleys." Despite the challenges she faces in a rapidly changing work environment, she is focused on the outcome: improving the safety culture for Foster Wheeler employees, "It's not easy everyday, but it's so important to keep people safe in our field," she commented.

With a goal to become a safety professional, Donna is dedicated to continuing her education and involvement in the field. "I want to be as equipped and ready as I possibly can," she explained. She recently completed training in Clinical and Behavior-Based Ergonomic Specialist credentialing training, is taking a class in group dynamics, and is a board member of the Houston Human Factors and Ergonomics Society.

Donna finds the changes she witnesses in the behavior of Foster Wheeler employees to be the most rewarding part of her work. She has taken an interest in spearheading the implementation of Ergonomic awareness as an added focus to the BSMART process in the Foster Wheeler office environment. As part of BSMART, safety antecedents like signs, logos, and banners are displayed around the office. Donna has noticed that such safety reminders have resulted in employees talking more about safety and taking the time to be aware of safety enough to conduct observations in the BSMART process.