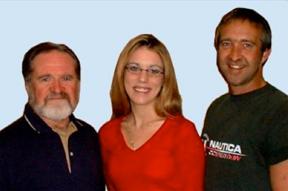 Quebecor World is the largest commercial print media company in the world with 43 thousand employees in 160 plants in 16 countries. At the Hazleton, Pennsylvania plant, built in 1987, approximately 300 employees work in a continuous operation to print and bind telephone directories. In a normal year, they produce over 300 different titles, which is almost 40 million individual books and 128 million pounds of paper.

When the plant first opened, we had little in the way of formal safety programming, for example, no published safety guidelines and no case management for injured associates. Being a craft that is centuries old, sometimes it seems that safety attitudes are equally old. “Printing is a dangerous business.” “There's nothing you can do – accidents will happen.” “After all, they are accidents – people aren't trying to get hurt.” However, in the early 1900's, we did implement safety policies and procedures, began case management, and instituted alternate-duty work for those with physical restrictions. We tried to raise awareness with safety posters, safety videos, monthly safety meetings, safety games, and Safety Week festivities. We formed a Safety Committee of managers, supervisors, and associates. Division Human Resources Director, Jay Phillips, trained managers, supervisors, and Safety Committee members to investigate incidents and to do monthly inspections of the plant physical conditions.

As a result, OSHA recordable incident rate decreased from 27.0 in 1991 to 6.1 in 2000, which is lower than the Commercial Printing industry average of 6.6. Worker's compensation costs also went down. However, improvements appeared to stop around 1998. We could not reduce incidents below a certain plateau. In the mid-2000, we heard about Behavioral Safety, a different approach that seemed to promise dramatically better results in achieving safe working practices. Behavioral Safety also aligned with a recent corporate requirement that each plant include observations in their safety program. Jack and Jay attended the Behavioral Safety Now conference in Reno, Nevada in October 2000 to learn more about this approach and chose a consultant.

At the Reno conference we attended all general sessions and as many concurrent sessions as we could, spoke to several companies that had already implemented a Behavioral Safety process, and interviewed every consulting group represented. We were interested in a process that would empower associates, fit in with the small-team environment of the plant, and be positive in approach. Most of all, we wanted to develop internal expertise in the underlying technology so that we could continuously improve the process after the consultants left. In the final analysis, Quality Safety Edge seemed to best fit our needs.

In November 2000, Terry McSween, President of Quality Safety Edge, met with all of our managers, supervisors and Safety Committee members to describe the history and science of behavioral safety, outline how a process could be designed and implemented, and give examples of its effectiveness. Associate members of the Safety Committee had concerns about the willingness of their fellow associates to conduct observations and feedback but became convinced that Behavioral Safety was probably the most effective method to reduce injuries.

In December 2000, Grainne Matthews, Quality Safety Edge Project Manager, came to Hazleton to evaluate our safety objectives and plant culture. During the manager and supervisor interviews and the associate focus groups, we also learned more about Behavioral Safety and nominated our colleagues for the Design Team. The final Design Team represented every area of the plant and every job classification from a part-time temporary associate to the Vice President / General Manager. Both the Division and plant Human Resource directors were members of the Design Team.

In January 2001, our Design Team began to learn about, and then customize, the Values Based Safety Process for our unique plant culture. For example, we created unique Observation Checklists by analyzing all 273 injuries from the last five years to identify those practices that would have prevented or lessened the injury. We found that 80% of injuries could have been prevented by the behavior of a person involved in the incident and 15% involved a combination of behavior and conditions. In other words, 95% of the injuries could have been avoided or lessened in severity if someone had done something different. We found that some preventative practices, such as manual lifting, were important across all work groups but that there were also specific practices important in each of the six work groups, for example, handling plates in the Press Room. Therefore, we developed six different checklists with the most important safety practices. Each checklist contains six plant-wide practices and approximately five group-specific practices.

We then presented the finished process design to the entire management team for their feedback and approval. We asked them to sign a Management Commitment statement agreeing to the key features of the process and their roles as managers. We presented this to each associate during Coaching Workshops to illustrate management's commitment to abide by our design. The key features of our process are:

In February, six of our Design Team members volunteered to become Observer trainers. We first observed Grainne conduct an Observer workshop while completing various exercises, then we analyzed all the materials and exercises, next we prepared our own version of each module, and finally, we co-facilitated a workshop with Grainne. Our Observer workshop provides every employee of the plant with an understanding of what Behavioral Safety is and why we need it. It teaches participants to observe accurately and provide helpful feedback. We end every class with a request for a commitment from each person to give the process a try by doing an observation within the week. About 60% of participants made that commitment.

Our goal was to train all employees in six weeks. We had no idea how hard it was going to be to get everyone on every shift in every department to a workshop. But, with the help of all the managers, supervisors, trainers, and associates, we succeeded in training 99% of associates in about 10 weeks.

We chose to use this Train-the-Trainer model rather than have Quality Safety Edge train all of our Observers because:

In the first year of our Values Based Safety® Process, our Steering Committee focused on giving our process a strong foundation by measuring, providing feedback on, and recognizing and celebrating: 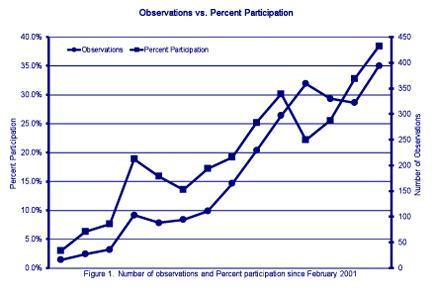 Total injuries (first aid, medical attention, and lost workday cases) decreased from 58 in the year prior to implementation to 42 in the year following. Figure 2 shows that, as the number of observations increases, the number of injuries decreases. 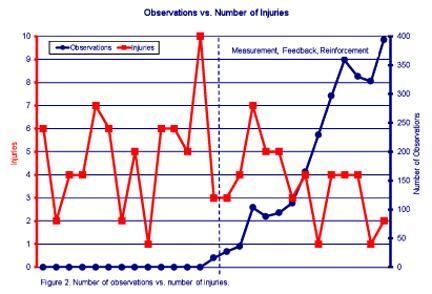 Prepress: Production begins in our prepress department where we process all incoming digital copy and produce large aluminum plates for use on the printing presses. The 30 associates in this department spend most of their time at computer workstations but they also handle sharp plates. Cutting and ergonomic issues caused the majority of injuries in our analysis of the injuries from 1995 to 2000. Therefore the group-specific practices on their Observation Checklist are body position at computer, designated tool for task, plate handling, stretch breaks, and personal protective equipment (each of these practices is further defined on the checklist). Monthly participation averaged 14% (range 3% to 30%). Observations averaged five (range 1 to 10). Each participating associate averaged one observation per month. Both participation and observations are gradually increasing. Injuries decreased from four to one in the year following implementation.

Press Room: Our 93 press room associates work in an area with rapidly moving, loud, and heavy presses printing signatures from the plates. They also handle sharp plates and have to climb up the three story machines. The pace of work is extremely fast and there is just enough staff to run the press on each team. Sharp objects and ergonomic issues also caused the majority of injuries in the press room in 1995-2000. Therefore the group-specific practices on their Observation Checklist are body position, handling plates, communicating intentions, three points of contact, and inspecting bundle boards. Participation averaged 15% (range 3% to 28%). Observations averaged 54 each month (range 8 to 155). Each participating associate averaged four observations. Efforts made to facilitate participation include scheduling a relief associate to replace someone at a press to allow that person to conduct observations. As a result, both participation and observations are steadily increasing. Injuries have unfortunately increased from 25 to 28.

Bindery: Our 83 bindery associates assemble the printed signatures into telephone directories on two rapidly moving, loud binding lines. They also work with two guillotine-like trimmers to cut the books to finished size and with a palletizer to stack them for shipping. The pace of work in the bindery is dictated by the speed of the line and some positions work rapidly and continuously. Sharp objects and moving equipment caused the majority of injuries in 1995-2000. Therefore the group-specific practices on their Observation Checklist are safe cutting, designated tool, guards in place, eye protection, and inspecting pallets in palletizer. Participation averaged 22% (range 8% to 42%). Observations averaged 79 (range 19 to 148). Each participating associate averaged four observations. Efforts made to support participation include the Steering Committee representative presenting participation and observation data in department safety meetings and making blank checklists and observation drop off boxes more accessible. Both participation and observations are increasing. Injuries have decreased from 20 to 12 in the year since implementation.

Material Handling: The 23 material handling associates operate eight forklifts to deliver rolls of paper to the press room and palletized telephone directories from the bindery as well as a myriad of other material handling tasks. Strains related to body position caused the majority of injuries in 1995-2000. Therefore the group-specific practices on their Observation Checklist are body position when lifting, pulling and pushing, check condition of garage doors & waste bins, blow horn when approaching intersections, clear line of vision, and stack pallets no more than three tiers high. Participation averaged 11% (range 0% to 35%). Observations averaged six (range 0 to 16). Each participating associate averaged two observations. Efforts made to increase participation include improving the accessibility of blank checklists. Both participation and observations are on an upward trend. Injuries decreased from five to two.

Maintenance: Our 14 maintenance people repair electrical, electronic, and mechanical equipment all over the plant. The group-specific practices on their Observation Checklist are lock and tag out; wear personal protective equipment when welding, grinding, or cutting; designated tool; walk in walkways, check for forklifts; and three points of contact. Participation averaged 11% (range 0% to 36%). Observations averaged two (range 0 to 5). Each participating associate averaged one observation. There is an increasing trend in the participation rate. Injuries have decreased from three to zero.

Office and Quality: The 36 associates in the Quality department and other support positions in the office generally work in a relatively safe environment so they only have three specific practices on their Observation Checklist: body position at the computer and walk in walkways, check for forklifts, and wear earplugs and steel toe shoes when in production areas. Participation averaged 24% (range 8% to 47%). Observations averaged 16 (range 3 to 32). Each participating associate averaged two observations. Efforts made to continue participation include the Steering Committee representatives discussing the data with the staff at the monthly department safety meetings. Both participation and observations are rapidly increasing. Injuries remain at zero. 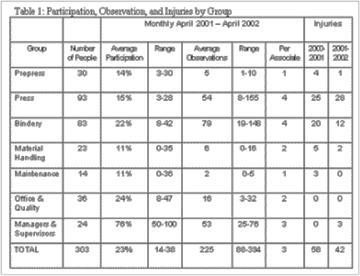 Quebecor World Hazleton embraced Behavioral Safety as a positive, employee driven process proven through research and experience to reduce injuries. We designed our implementation to maximize employee ownership and in-house expertise. The most important tool to accomplish this was training six employee Design Team members to teach other employees about the process and how to participate. Evidence that our efforts were successful include a decision by the Division Senior Management Team to implement the Values Based Safety® Process at our sister plants after hearing a presentation from three of our Steering Committee members who were also observer Trainers.