At one point, the plant’s incident rate was several points higher than the industry average and the plant’s management took action. “Last year, they paid a ton of attention to safety and dropped their rate to unheard of levels,” explains Grainne Matthews, Ph.D., Vice President Utility Services. “But they remained concerned that the improvement wasn’t sustainable without a systemic change. They know people are still taking risks and that the potential is out there.” (See Figure 1.) 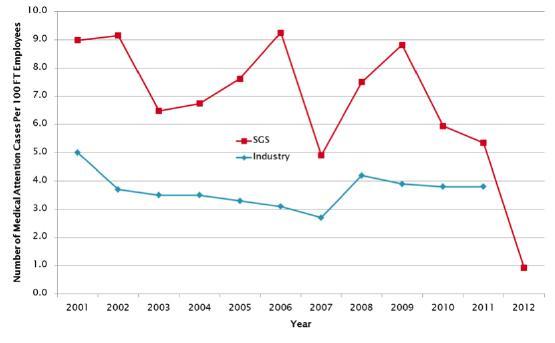 With support of the corporate headquarters and the positive data from previous TEP locations that have implemented behavior-based safety, the plant’s management requested a safety culture assessment. After completing the assessment Matthews states, “I was quite direct with the plant director. I said that this process, to be successful, requires a really strong demonstration of management commitment. He asked, ‘What would that look like?’”

According to Matthews, management commitment meant that the operations and maintenance superintendents “who basically run the plant and keep those four units running and megawatts flowing and manage the majority of the employees there” would have to actively participate in designing and managing the new process. This would mean nine days to the design of the facility’s newly named Employee Based Safety process as part of the employee-led design team. When asked if they were willing to do so, both superintendents immediately agreed and their participation impressed Matthews so much that she deemed them exemplary safety champions even before the process has rolled out at the generating station.

In a series of three- and two-day meetings, the design team worked for nine days over a period of two months and Grainne observed behaviors that she doesn’t always encounter from those in managerial positions. “They were in these workshops all day, every day without interruption,” she says. “They never had to leave early, come late, or step out for a phone conference, a meeting, or anything. Willingly, cheerfully participating, actually being present and undivided attention is rare for management. I was really impressed.”

Arlin Waters, operations superintendent; and Kelvin Walker, maintenance superintendent were the two most senior members of the Employee Based Safety design team. “It would have been easy for them to dominate the entire design process.  Everybody reported to them, but they let the employees design the process,” states Matthews. For Waters and Walker, the cooperative approach came naturally. Both have worked in the plant for 29 and 28 years respectively, and they acknowledge the expertise of their employees. “In the design team, titles were set aside. Every employee has something to offer and it’s important to listen to what they have to say,” Waters comments. “It’s important to get feedback from the individuals who do the job day-in and day-out. They are the professionals. Safety is very important to me and this station. If I got up and left a discussion, then I wouldn’t be setting a very good example.”

The design team of 17 included representatives from each of the five operating crews of the Operations Department, representatives from each of the Maintenance Department’s responsible areas, and a representative from the Engineering Department. Early in his career, Walker witnessed firsthand several workplace incidents, one that resulted in a fatality.  “Safety has always been first and foremost with me,” he states. “I’m all about building teams and for me to be part of that team, I have to take my superintendent status, push it away and just be part of the group. That’s why it’s important to me and that’s why it’s easy for me to turn my phone off and say I’m dedicated to this process. I have to have confidence in the people that are on-site to be able to make command decisions if necessary and involve others when I’m not there.”

When he initially committed his time, Walker he was a bit worried. “We had a lot going on, but everyone’s got dragons to kill. It turned out that the first two days off the site were the most enjoyable training sessions that I’ve ever had,” he admits. Waters agrees, saying, “Grainne did an excellent job helping us get our program going and steering us in the right direction.

The result is a very positive start to the new Employee Based Safety process at TEPGS. “Everybody on the team was exceptional”, says Waters. “Nobody was shy about expressing their thoughts or opinions. I was impressed with the whole team.”

Evidently, plant management agreed. After the design team presented their design plans, the rest of the plant management wholeheartedly offered their support. Several in the audience even stated that the presentation was the best they’d ever attended on the job site. The next step—steering committee training followed by the rollout of the safety process throughout the plant—now has a firm foundation on which to build. “You can’t push a rope,” says Walker. “You have to lead by example. If we show employees that this is a good, viable program from the ground up, then we can prevent incidents just by changing our behavior. Involve the employees and that’s Employee Based Safety. Make them part of the process, show that you’re sold on it, and it’s a win/win.”