Sometimes, a very safe workplace can hold hidden dangers. That’s what became apparent at the Embraco North America (ENA) facility in Suwanee, Georgia. In operation since 1991, this sales, R&D, and distribution center for Embraco—a world leader in the manufacture of refrigeration compressors— enjoyed a perfect safety record until an unusual, but preventable event occurred.

“I witnessed the first incident with the operator years ago and it was an eye-opener for us,” says Kwame Akosah, production supervisor. And, in fact, the accident did make the employees of this pristine warehouse facility aware that even when an operation runs like a well-oiled machine, incidents can occur due to human error. Everyone remembered the incident and of course tried to diligently prevent such a thing happening again. Six years passed before another wake-up call.  “They called me over the intercom to tell me that I needed to unload a truck, but one of my coworkers had already unloaded the truck,” recalls Tyrone Brown, receiving and shipping. “I put the dock plate out to get ready and the truck pulled out.  I got so close to the edge that my forks were hanging off the dock. I stopped just in time. You can imagine; the dock plate falls down as soon as the truck pulls off! I literally thought I was about to die. I stopped just in time.” 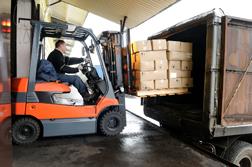 This time, however, the group had a new tool for addressing safety incidents: Behavior-Based Safety (BBS). The process doesn’t rely only on awareness change, but enables employees at every level to observe and identify the behaviors at the root of unsafe events and to work together on viable solutions that change behaviors.  Embraco selected Quality Safety Edge (QSE), a firm that develops custom behavioral safety systems, to develop the BBS process for its global operations in six countries—Brazil, China, Italy, Slovakia, Mexico, and the United States. (ENA in Suwanee was the first Embraco location to launch BBS.) During the BBS Steering Committee meeting held regularly at the Suwanee location, Brown brought up the frightening near-miss that he had experienced, “I suggested that maybe we need to start taking the truck drivers’ keys, and then everybody kind of pitched in after that,” he says.

That was the beginning of a straightforward, effective remedy for an at-risk situation. “Through some of the suggestions in the BBS Steering Committee talks we decided that we had to come up with a procedure to make sure that our forklift operators were safe going on and off the trucks. Our previous standards . . . I would say we just did it by saying, ‘Hey, the truck is empty.’  If it’s empty, then the truck driver’s got to go,” says Burks. “We had things in place but there were no standards. It was more like what may work for one forklift operator may not work for the other. We had to come up with a standard that all of our people would have to use in order to keep from happening what almost happened to Tyrone; we needed a way to change behaviors,” says Burks.

When a truck driver docks his truck, he brings in his paperwork. At that time he now has two options. If he wants to sit in his truck during the load or unload, he must relinquish his keys. “We realized we needed to take the keys from the driver if they sit in the truck, because when they finish with the loading, they just pull off. But they might make a mistake,” states Akosah.  If a driver wants to retain ownership of the keys, he must sit in a designated area in full view of the Embraco personnel.

Since the corresponding paperwork for each truck is placed on a clipboard at the truck’s docking station, today the keys for that truck are also placed on the clipboard when the driver opts for staying in the truck. “So then the person in charge of the paperwork and the keys is actually the forklift operator. He makes the call when he’s finished; it’s not me or somebody else who is sitting at the other end of the warehouse saying, ‘Okay, it looks like the truck is empty.’ When he finishes unloading, the forklift operator takes the paperwork and the keys and hands them back to the driver,” Burks explains. “This way we know that the truck is completely empty and we don’t have the problem of actually having the forklift operator on the truck when the driver pulls off. That’s what we did essentially to make that a safer situation.”

Due to recently revised government safety and counterterrorism regulations, getting the truck drivers to comply with the new routine wasn’t that difficult. They did have to break the habit of insisting on supervising as their trucks were being loaded and unloaded. However, overall, adopting the new strategy was a smooth transition.  “When we explain to them what almost happened, it’s okay,” Brown states.

Was it a hassle to get into the habit of complying with the new routine? Burks smiles and answers truthfully, “Yes it actually was at first,” he admits, and then comments, “I’ll give Tyrone the biggest credit. He was the one promoting this process, because I would forget, the clerk would forget, and he would constantly ask me:  ‘Did you talk to the driver?’ After a few times of hearing him say this, I figured we’ve got to start talking to the drivers. He was definitely the catalyst for making sure that it was done and now I would say that we are at 100 percent compliance, because I’ve not seen a driver that either did not have his keys on the clipboard or was sitting in the designated area.”

The important point that Burks then makes and everyone agrees with is that it’s not the keys that power this successful new process. It’s the paperwork. The keys act as a safeguard, but truck drivers will not leave without their paperwork. “They’re not going to leave here without that bill of laden. So we tied the keys, the paperwork, and an awareness of safety and our BBS process together. We tied their behavior into our safety efforts,” says Burks.

It’s a simple, yet very clever behavioral solution to what could have been a deadly potential problem. Using the skills they learned from BBS, this innovative group uncovered the behaviors involved in a process and linked them to consequences that they could control. Brown summed up the resulting reward for the effort: “I think that everybody feels safer now. Everybody was worried about going on the trucks, but once we started doing this, there’s no problem.”