E-SAFTE at Lockheed Martin’s Fort Worth, Texas, facility stands for “Environment and Safety Actions for Team Excellence.” Lockheed Martin strives to instill the mindset in all employees that accidents and injuries are preventable and avoidable, which is a mainstay of the behavior-based safety (BBS) initiative started in 2004 as part of the organization’s overall safety initiative. “I volunteered to participate in an E-SAFTE team because I’ve been injured,” explains Lewis Love, the BBS site coordinator. “I wanted to be accountable to myself and my teammates to prevent further injuries.” 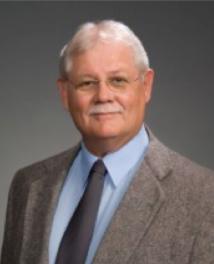 Love, employed with Lockheed Martin for 30 years, works as an aircraft assembler on the F-16 program. He has become passionate about BBS as the safety team leader for the F-16 Fighting Falcons E-SAFTE Team, one of many such teams at Fort Worth. The BBS process began as a small group of 10-12 volunteers, a group which has since grown to approximately 500 employees in 32 teams at Fort Worth alone, with many more BBS teams assembling at other corporate locations. Love attributes this exponential growth to several factors: visual imaging around the plant to pique interest, orientation to safety opportunities for new employees, high visibility of safety observers and activities, and word of mouth. Active recruitment into a safety team hasn’t really been necessary, according to Love. “When people see things starting to get fixed, when they see improvements, when they see the team celebrations, when they see their concerns being taken care of in a positive way, well they’re interested and they want to become part of it,” he says.

Lockheed Martin recently recognized Love’s many years of safety leadership by presenting him with the Aero Star Award, a corporate recognition for stellar performance honoring exemplary individuals and teams who have contributed to the company’s success— in Love’s case for his work on the F-16 forward fuselage and for mentoring E-SAFTE teams. In the years since he became involved with the BBS process, Love has become highly knowledgeable in the strategies that have worked well. “Undoubtedly, it has been beneficial,” he says. “We’ve reduced injuries. I haven’t been injured since 2004 and I had several injuries before that. It’s been incredible.”

At the Fort Worth location, the E-SAFTE teams are made up of 10 to 30 trained volunteers who work together to improve the environment, safety, and health of their peers. The team members use observation checklists not only to optimize safe work behaviors but to identify any conditions that could cause injury. For instance, the E-SAFTE team members, trained in ergonomics, introduce work-and-stretch programs throughout the facility. “During the observation process if we see somebody who is in a certain position we’ve been trained to actually demonstrate a stretch for that particular task. So they take ergonomic stretch breaks during their tasks. If they are up in a cockpit, for example, they would come down, take a break, do the stretch and go back to work,” Love explains. As a result, many repetitive motion and strain injuries have been avoided. The observations have also led to environmental fixes such as searching out tools that better accommodate wrist motion and using adjustable benches that alleviate back strain. 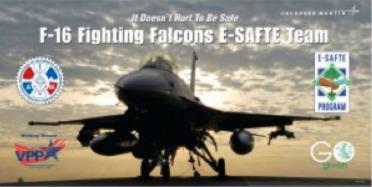 On the reverse side of each observation checklist are detailed descriptions of the behavior being observed. Observers ask permission of the person they want to observe and not only provide proactive feedback to that person, but also ask the employee being observed if he or she has any safety concerns. The team works to immediately act on any concerns, further cementing employee trust in the process. “Through the observation checklists employees feel ownership of getting things done from concept to completion. This gives both E-SAFTE team members and employees who reported the change bragging rights which encourages them to continue observing, reporting, and implementing safety changes,” Love remarks. “Over time, using the observation checklists, E-SAFTE team members notice trends that lead to long-term fixes that when implemented solve the problem and not just the symptoms.” Love shares several reasons that Lockheed Martin’s BBS process remains successful: 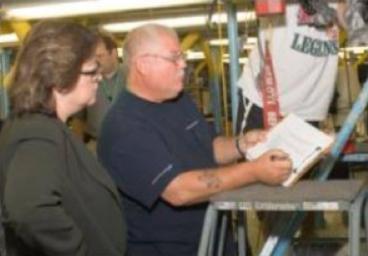 “There are a lot of hands in a lot of different departments and an Environmental, Health, and Safety (ESH) team. They are always available and have bent over backwards to help us. They are on call if anyone needs help or has a question,” Love states.

“People here really care about each other and this is a great way of showing it. The hardest step of the program for me and I think others was asking the first person if I could observe them working. Once people get over that, they realize that the people who are being observed are learning that there are often safer ways that they can do things and the people who are doing the observing are also consistently improving. The biggest room in the world is room for improvement and  we’re letting that happen here,” Love comments.

"Our safety teams allow employees to be directly involved with improving their personal safety as well as that of their teammates giving them both ownership and pride.” —Lewis Love

The teams use the data and detail from observations to develop corrective action plans which they implement and present to leadership. They earn points for these interventions and every six months these activities, presentations, and points earned culminate in a celebratory event with recognition and rewards. “The benefits are that we are fixing problems and we’re not getting hurt,” Love says. “Also as more leaders and employees understand the value of the E-SAFTE teams, more trust is placed in the team members, which has allowed them to be even more successful.”

As Love sees it, BBS has naturally extended throughout the workings of the operation. His enthusiasm and dedication make him a true BBS champion, but he attributes the facility’s safety to his teammates. “It can be difficult to juggle the budget, quality, and schedule needs of a rigorous manufacturing facility, but now people realize that budget, quality, and schedule go hand in hand with safety and we can’t meet any of those requirements if our team isn’t working safely,” he says. “Our safety teams are creating a safer work environment for everyone. Our processes are designed to protect the employees and we’re building safety into the way we build aircraft.”