How to Identify the Behaviors That Lead to Success

In business and industry, behavior analysts help organizations improve human performance. The core purpose of quality initiatives and management development efforts is to change employee behaviors. U.S. corporations spend billions of dollars trying to encourage their employees to do things differently (change their behavior)—to come up with new ideas, work more safely, improve interpersonal effectiveness (talk to employees in a manner that encourages engagement and commitment to the company’s performance goals), and do things to eliminate waste.

For example, when you were working your way up the career ladder, did anyone in authority ever say to you that you needed to “develop” a “sense of urgency?” Or perhaps, your supervisor, parent, teacher or coach told you that you needed “to become,” or “to be,” one of the following: 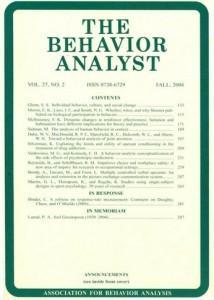 Did it irritate you? Make you mad? Confuse you? Overwhelm you? Did you take it personally—cause you to become emotional, defensive? Make you feel bad about yourself? Cause you to dislike your supervisor or manager? Using sloppy, imprecise words in performance coaching elicits emotionalism, defensiveness and resistance to change. Managers who do not understand how to break down words that describe traits into words that describe behaviors—something employees can change—are doomed to frustration.

If you responded emotionally to sloppy verbal coaching, it was not because you are oversensitive; when your manager says you “need to develop a sense of urgency,” it sounds like a criticism about “who we are,” when we should be getting feedback on “what we have done or not done,”—your behavior. Leaders, managers, and supervisors do not have experience in breaking down tasks into the subsets of behaviors, then breaking down the subsets into finer grained, more precise individual behaviors that are linked together to culminate into a performance result.

The process of dissecting tasks, accomplishments, results, and achievements into the specific behaviors that compose their architecture is a form of behavioral root cause analysis. Telling a supervisor that he or she needs to be “a people person,” is the same as telling an employee working in a factory to “avoid getting hurt;” neither admonition will be effective. The employee needs more guidance—more specificity around exactly what he or she needs to do or not do that leads them to improve interpersonal skills in the first example and to work safely in the second example. The error in each of these instances is one of not being precise—not specifically identifying the behavior you want from the performer.

If you listen closely to leaders, managers, and supervisors you will hear them use ambiguous descriptive terms like those above in performance evaluations and work discussions. Each of these words collectively summarizes many behaviors. The problem with using these words in reference to human performance is that they are connotative; “they have the power of implying or suggesting something in addition to what is explicit,” they convey and elicit emotion.

There is an ethos surrounding specificity that limits its practice; often leaders assume that it is codling employees to precisely pinpoint the behavior that will lead them to succeed. Generally, managers and leaders seem to find it distasteful to coach others about precise responses (behaviors). It is as if an employee can only demonstrate their worth or earn their pay if they “figure out” what behavior is necessary to be successful.

Many leaders are self-motivated, highly intelligent, work-oriented, obsessive types; maybe most are. They rise to the top by pushing themselves past barriers and pushing themselves to perform better—to be the best. It is understandable that they would find micro-level behavioral coaching distasteful. The feeling that “others should do what I did,” is pervasive. When we pay a price for what we have, we hate to see others being handed the answers—being spoon fed with the “right behavior.”

If you ask your best salesperson, customer service agents, IT personnel, and HR representatives to describe 2 things that they say or do that causes them to perform better than their peers, you will find that their success is most often a product of something they “do” differently—a behavior, rather than some innate trait or talent they were born with. In the company you are currently working in, is there anyone who is identifying the differentiating behaviors—the behaviors of excellence for every job description, work unit, team, department, and business unit?

My experience in interviewing leaders and employees at every organizational level and function tells me that sometimes one behavior can make the difference between the mediocrity and the exemplary. In behavior-based safety, one critical safety practice can prevent serious injury. In customer service, one sentence spoken in the right tone can defuse a problem and create a lifelong customer. The best salesperson usually does one or two things that the average salesperson does not do. Every behavior that can build a stronger organization, team, customer base, or sales force that is unidentified is lost profit and opportunity.

One of my clients experienced performance success by using behavioral investigation to resolve what appeared to be a resistant quality problem. They were in the business of producing sterile egg embryos that were later used to create a vaccine that prevented a certain disease in chickens. If the embryos were not perfectly sterile, the vaccine was useless. They were achieving about a 91 percent success rate in producing the quality embryos.

Several managers were in my training class learning about the value of being able to identify specific job behaviors that were critical to performance. One manager had a flash of brilliance; “Why don’t I ask the employees in the lab if they know what specific behaviors would improve quality?” This seems like an obvious tactic, but it is not available to managers, supervisors, or employees who do not know how to break performance tasks down into specific behaviors and analyze the impact of those behaviors.

The manager was so excited about the potential of this approach that he went out during the next break and phoned the lab. He spoke with the lab supervisor and asked, “Iris, could you and your team come up with three or four things you could do that would reduce the number of off-quality embryos we are making?” He proceeded to give her enough information to understand that by “to do,” he was talking about specific behaviors that would reduce off-quality embryos.

Iris said, “Sure!” When he called her back an hour later the lab team had produced a list of five key behaviors that would reduce off-quality embryos. They were going to track them for a few days until the behaviors became habit. Within one week, quality embryos had risen from 91 percent to 98 percent; the only change had been the identification of key behaviors related to solving a problem.

One of the largest hospital systems in America reduced its billing cycle time by 50+ days. All they did was ask employees to identify behaviors—things they could do—to reduce the cycle time. Over a period of 12 months, employees identified behaviors that saved the hospital over $200,000,000.

There is a big return for identifying success behavior.